Preamble
'Memphis Mangler IV' took place yesterday in the Defence Capability Centre, Defence Academy, Shrivenham. It was organised by Jim Wallman (a founder member of Wargame Developments and Megagame Makers) and Tim Price (who joined Wargame Developments just a few months after it was founded). Like me, Jim and Tim (along with Andy Grainger, who was also present yesterday) took part in the original ‘Memphis Mangler’ wargame that was set up and run by the late Paddy Griffith at the Royal Military Academy, Sandhurst in 1981.

The wargame was conducted in a set of rooms near the entrance to the Centre thus:

Each participant was allocated to one of the two 'player' teams (The 'Free World' team or the 'National Liberation Forces' team) or to the 'Control' (or umpire) Team. 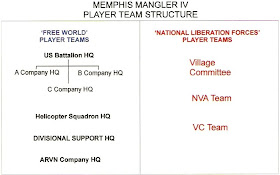 Briefing
The wargame began at approximately 10.30am with a briefing in Armstrong Lecture Theatre. 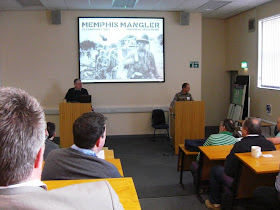 Jim Wallman (on the left) and Tim Price (on the right) conduct the pre-game briefing in the Armstrong Lecture Theatre.

This enabled the various participants to meet the other members of their teams and for the game's structure to be explained to the participants.

Planning
Once the briefing was over, each team went to its allotted room, where they began to plan for the forthcoming operation. The 'Free World' team or side (henceforth referred to as the FW) was by far the larger of the two, and each player had a specific task within their team. Their brief was to conduct a sweep of some villages near the Demilitarized Zone (DMZ) in order to gather intelligence and to reinforce the concept that the FW controlled the area. 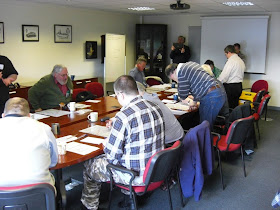 The Free World team planning for the forthcoming operation. What is of particular interest is that each player or sub-team seems to be very intent on their part of the planning process.

The 'National Liberation Forces' team (henceforth referred to as the NLF) was a much smaller team, but they controlled a significantly larger force, whose brief was to inflict as many casualties upon any FW troops that entered the area and to reassert control of the border area near the DMZ. 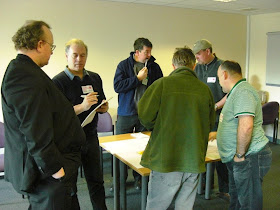 What was noticeable about the NLF team was how much time they spent together talking and planning their response to any FW incursions into their area of operations.

The Map Room
Whilst the players were planning what they were going to do the Control team or umpires (of which I was one) ensured that the Map Room was set up ready for the game to start. 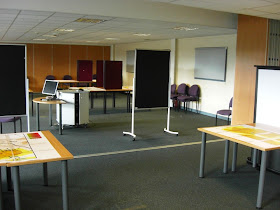 The room was organised so that each pair of large-scale sections of the map of the operational area were placed opposite each other on tables that were divided in two by screens. 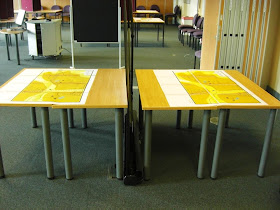 The outer side of the room was where the FW players would sit by the appropriate map section when their troops were deployed into the operational area whilst the inner side of the room was allocated to the NLF players. This arrangement was chosen in order to minimise the possibility of opposing player seeing what their immediate opponents were doing ... and what was happening on other parts of the battlefield! This tried and tested system seemed to work quite well on the day although it did mean that at times the Control team were running about like mad things when combats were breaking out all over the operational area.

It is worth noting that once deployed players were only allowed to communicate with their superiors or to ask for air/artillery support using hand-held radios ... which were not always very reliable!

Let Battle Commence ...
Once the planning stage was complete (and lunch had been eaten) 'Memphis Mangler IV' started at 1.00pm. The FW had requested that a Long Range Reconnaissance Patrol (or LRRPs, pronounced 'lurps'), be infiltrated into the area they proposed to use as a Landing Zone (LZ) during the night before the sweep was to begin. The LRRPs duly did as requested ... and ran into the tail of what they estimated to be a battalion of regular troops from the NVA (North Vietnamese Army). Despite receiving this intelligence, the operation commenced as planned at 0800 (game time) when 'A' Company of the FW/US force landed on the LZ ... and immediately came under heavy fire from AA artillery fire, small arms, and mortars.

'A' Company did its best to push forward from the LZ in order to clear the way for the follow-up waves of FW troops. Artillery and air support were used to pulverise a nearby wood from which the NLF fire had come ... but an unfortunate mistake by the FW player did cause a 'blue-on-blue' or 'friendly fire' incident when troops he had moved onto the infamous Hill 51 were hit by an airstrike that had been ordered to attack Hill 51. The subsequent CASEVAC (Casualty Evacuation) by helicopter took a long time coming, and was an indicator of future events. Likewise the fact that the LZ was kept under intermittent mortar fire by the NLF forces should have indicated that the NLF forces were much stronger (and better trained and organised) than anticipated.

Having secured the LZ and the surrounding area, 'B' Company and the ARVN (Army of the Republic of Vietnam) Company arrived and immediately struck out towards their objectives. Within a very short time they were heavily embroiled in firefights with NLF forces, and the number FW casualties seemed to reaching serious levels. 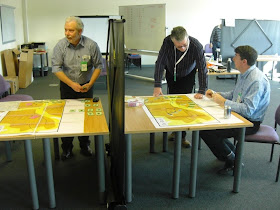 The commander of 'B' Company, US Army (Guy Farrish) looks suitable bemused with the situation whilst John Curry (one of the NLF team) discusses the situation with Tim Gow (my fellow Table Controller/Umpire).

The ARVN did manage to reach their objective and were able secure a large part of it. They were able to capture several prisoners and conducted some very useful interrogations that yielded some possibly useful intelligence. 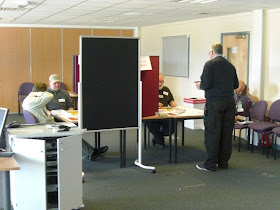 Jim Wallman (with his back to the camera) listens to the ARVN company commander (David Winch) whilst two of the NFL team (Allan Rowell and Peter Antill) patiently wait to hear the results of their attacks upon the ARVN troops.

Whilst this was happening, 'A' Company searched a nearby village and captured a small store of ammunition, some medical supplies, and lots of propaganda material. They also flushed out what might have been an NLF supporter, but he managed to make a run for it and escaped.

The LZ then came under attack just after a major re-supply mission had taken place ... and soon afterwards the codeword 'Broken Arrow' was heard over the radio net. This signified that all FW forces were to be withdrawn as soon as possible. Despite problems evacuating the dead and wounded and coming under attack from the NLF forces, 'A' and 'B' Companies were exfiltrated by helicopter from the LZ or from a nearby open area. The ARVN were left to their own devices, but had already cleared an LZ for themselves and were also recovered. Large quantities of various FW supplies had to be left behind, although attempts were made to render them useless.

Debrief
The game ended at the projected time (4.00pm real time) and the participants went back to the Armstrong Lecture Theatre for a ‘hot wash-up’ or debriefing session. 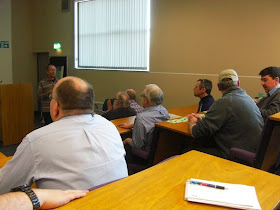 This began with Jim Wallman, Tim Price, Andy Grainger and I briefly relating how this incarnation of ‘Memphis Mangler’ compared with the original. The team leaders than gave their appraisal of events (which was very interesting, and in the case of the FW, wildly optimistic regarding the numbers of their own casualties and the number they had inflicted) … followed by feedback from the Control team. Tim Gow and I estimated that the FW had lost over fifty combatants (mostly WIA but with quite a few KIA or likely to die as a result of wounds they received) whereas the NLF suffered over one hundred casualties.

My conclusions about 'Memphis Mangler IV'
In my opinion the whole operation started badly … and just got worse as it progressed. That said the FW forces did their utmost to achieve their mission objectives and can justifiably argue that – despite their casualties – they gave the NLF forces a bloody nose. The ARVN did well, even though their main opposition were local guerrillas and not NVA main force troops.

The NFL can feel confident that they have taught the FW forces a lesson, and will be able to use news of this ‘victory’ in their propaganda broadcasts.

‘Where are those CASEVAC ‘choppers? There are people dying here!’ (An overheard radio broadcast from ‘B’ Company’s 2 i/c. Incidentally, there was a huge amount of First Aid equipment at the LZ – which was only 1Km away – that could have been used to treat the wounded and dying … but they could not get to it because they were under attack from all sides.)

‘I wish to move a platoon up to the top of Hill 51.’ (‘A’ Company commander to Table Control)
‘Are you sure you want to move a platoon to the top of Hill 51?’ (Table Control to ‘A’ Company Commander)
‘Yes. I am sure.’ (Moments after the platoon reache the summit of the hill a flight of fast jets is heard approaching Hill 51. Seconds later they drop their bombs on the hill.)

Who says that wargames can never be realistic?

Conclusion
This was one of the best megagames I have ever taken part in ... and was a great memorial to Paddy Griffith. Much of the briefing material was heavily based upon what he researched and wrote over thirty years ago. As a member of the Control team I had a great overview of what was happening ... and unlike some occasions when I have been an umpire, I was busy for the entire day.
Robert (Bob) Cordery at 2/26/2012 04:22:00 pm