Whilst I have been busy attending conferences and reading books, Archduke Piccolo has created two Byzantine Army Lists to use with my PORTABLE WARGAME: ANCIENTS rules.

The forces of Byzantium are covered in the first of two blog entries entitled SOLDIERS OF BYZANTIUM – A PROPOSED PORTABLE WARGAMES ARMY LIST, and it is illustrated with photographs of some of the beautifully-painted units. 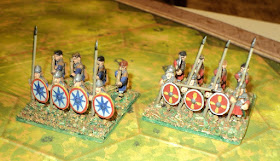 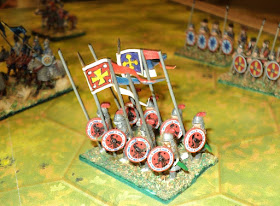 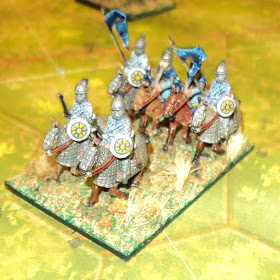 The second blog entry is entitled AN ENEMY OF BYZANTIUM – THE BULGAR EMPIRE, and is also illustrated with a number of photographs.

I am not expert on the Byzantine Empire, but these two Army Lists seem to reflect my understanding of the sorts of forces fielded by both sides in its wars, and I hope that it will show other wargamers who are using or thinking of using my rules that creating your own Army Lists is possible. Furthermore, the fact that the based units Archduke Piccolo has created seem to fit very nicely into Memoir '44 hexes shows that players are not restricted to using Hexon II or homemade hexes (or even a squared grid) in their games.
Please note that all the photographs featured above are © Archduke Piccolo.
Robert (Bob) Cordery at 9/14/2017 09:37:00 am